Happy Chinese New Year From Stikins Name Labels! It's The Year Of The Rat!

Just for Fun: Happy Chinese New Year From Stikins Name Labels! It's The Year Of The Rat! 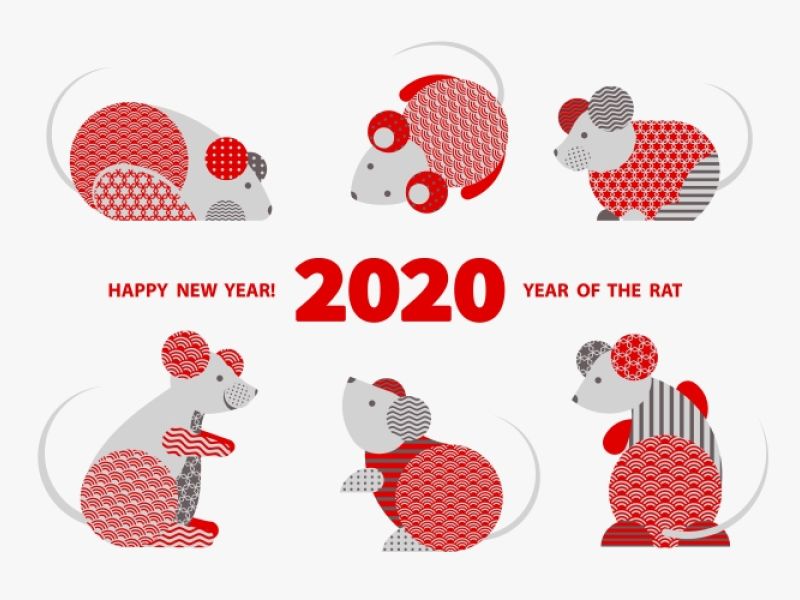 Tomorrow marks the start of the Chinese New Year and the Year of the Rat. We’re celebrating with the story of how Rat won the Great Race to become the first animal in the zodiac as well as taking a look at how Stikins are racing ahead with name labels that offer super fast orders, despatch and delivery, and application time!

The Chinese Calendar is lunisolar, which means that the sun and the moon are used to measure out days, months, and years. Each month begins with a new moon and each year begins on the second (or third) new moon after the winter solstice. This means that, this year, the new year starts tomorrow on 25th January.

Each year is associated with one of 12 Earthly Branches and one of 10 Heavenly Stems. The Earthly Branches are associated with the 12 animals of the zodiac (Rat, Ox, Tiger, Rabbit, Dragon, Snake, Horse, Goat, Monkey, Rooster, Dog, and Pig) and the Heavenly Stems are associated with one of five elements (Wood, Fire, Earth, Metal, and Water) alternating between a yin or yang force; this means that each year can be named according to its yin/yang force, element, and animal. This year is the Year of the Yang Metal Rat.

The Rat is the first creature in the Chinese zodiac; here’s one story from Chinese folklore that explains how this came to be…

…The Story Of The Great Race

The Jade Emperor organised a Great Race; each animal that took part would have a year of the zodiac named in their honour. The zodiac’s order would be determined by the order that they finished and the finish line lay just across a mighty river…

Rat, being small and a poor swimmer, decided the best way to cross the river would be to ride on the back of the strongest animal – Ox – and the kindly Ox agreed to Rat’s request. When they reached the shore, however, Rat leaped off Ox’s back, and raced ahead to claim first place.

Next to arrive was Tiger; though strong and powerful, Tiger had been pushed downstream by the river’s strong undercurrents. Overcoming the current had delayed Tiger’s crossing, putting it into third place.

Rabbit arrived fourth. Rabbit had tried to cross the river by hopping from stone to stone but ran out of stones halfway. Luckily, a log was floating nearby and so Rabbit climbed on, hoping to paddle to shore - but the log was too big and Rabbit too tired to do anything but cling on. All seemed lost, until a sudden gust of wind propelled the log to shore.

Just behind Rabbit was Dragon. The Jade Emperor was puzzled as to why the flying creature had not come first. Dragon explained that it had stopped to bring rain to a local village. Then, as it was approaching the finish line, Dragon had spotted Rabbit struggling to stay afloat, and decided to blow its log safely to shore – pushing Rabbit into fourth place ahead of itself.

Soon after, Horse appeared, racing towards the finish line and sure of securing sixth place. At the last moment, Snake unfurled itself from its hiding place curled around Horse’s leg – causing Horse to rear back in surprise and allowing Snake to claim sixth place for itself.

A little later, Goat, Monkey, and Rooster arrived together on a small raft. They had teamed up to cross the river and were rewarded with the next three places.

Next to finish was Dog. The Emperor was surprised that Dog had taken so long because it was a good swimmer. Dog claimed it had stopped to take a bath because it had gotten dirty during the race – when really, it had been having far too much fun splashing around in the river and got distracted.

The Jade Emperor waited a long time for the final participant to arrive. Just as he was about to announce that the race was over (and Pig disqualified), a loud oink was heard. Pig had gotten hungry during the race and then, having stopped for a quick snack, became sleepy and dozed off. Fortunately, Pig had woken up just in time to claim the final place in the zodiac.

We’ve designed Stikins to be super fast from start to finish – the perfect way for busy families to get their stuff labelled so they can get on with the more fun things in life.

Customers can order name labels at any time from our website, where our online order form makes it easy to complete your order in seconds! Simply enter what you want printed, select a pack size, enter your address, make payment, and you’re done.

We print name labels every day, Monday to Friday, with our last print run at 3pm. This means that orders placed by 3pm (Mon-Fri) are despatched same day, while those placed after 3pm, over the weekend, or on Bank Holidays are printed on the next working day. When you order online, we confirm the despatch date for your order before and after you checkout.

Our standard delivery service uses Royal Mail’s first class service, which means that around 93% of orders arrive next day. As this is not a guaranteed service, it can take a few extra days for orders to arrive – which is why we offer a Special Delivery option. This service costs £6.30 (which is what Royal Mail charges us) and guarantees that your order will arrive on the next working day by 1pm.

Finally, Stikins are name labels that you simply stick on – job done. Peel each label off the backing sheet and stick it down firmly. When labelling clothing and fabric items, you need to apply your name labels on to the wash-care label, rather than directly onto the fabric itself.

To find out more about Stikins, please visit our information pages or contact our Customer Service Team!