To Celebrate The Year Of The Ox, We Learnt More About Different New Year Dates

Just for Fun: To Celebrate The Year Of The Ox, We Learnt More About Different New Year Dates 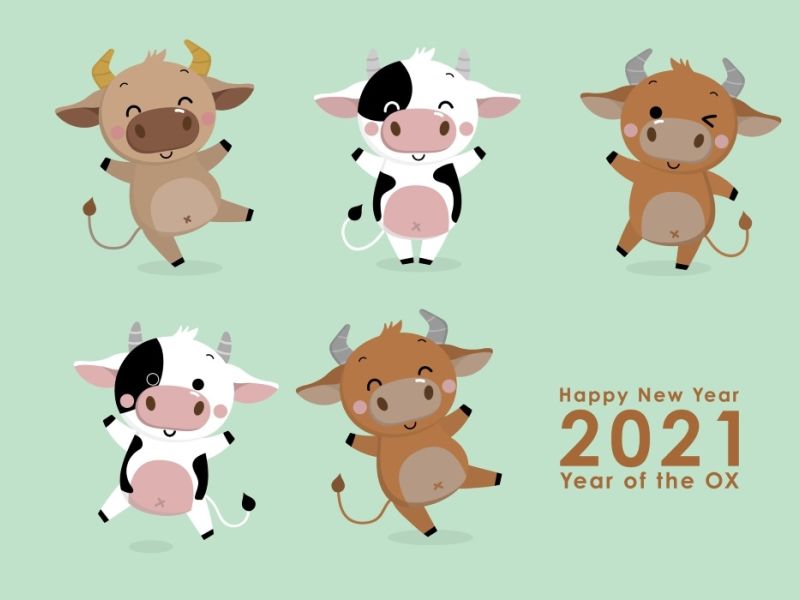 Today is the start of the Lunar New Year and the Year of the Ox. To celebrate, we decided to learn more about why new year celebrations take place at different times.

Why Does The Lunar New Year Start Today?

The Chinese calendar is lunisolar, which means it is based on the cycles of the sun and the moon. Each month starts on the new moon. The winter solstice (shortest day of the year) falls in the eleventh month. This means that each new year starts with the second (or third) new moon after the winter solstice. This can happen anytime between 21st January and 21st February.

Last year, the winter solstice fell on 21st December. The first full moon after this fell on 13th January, which meant it marked the start of the twelfth month. The second full moon falls today, which marks the start of the first month of the new year.

The Chinese calendar also follows a 60-year cycle. This cycle is based on a combination of ten repeating “Heavenly Stems” and twelve repeating "Earthly Stems". The Heavenly Stems are symbolised by the elements Wood, Fire, Earth, Metal, and Water in alternating yin and yang forms. The Earthly Stems are symbolised by the twelve animals of the zodiac.

The symbol for this year is the YIN METAL OX.

Why Do People Celebrate New Year’s Day At Different Times Of The Year?

New year celebrations take place all year round because different places use different calendars and starting points. These points are often dates or events that are of significant cultural, historical, or religious importance.

The seasons have always been a common way to divide the year. They were important markers for agricultural societies and cultures. Spring was the time to sow new crops, while autumn was harvest-time. The solstices and equinoxes were popular choices for new celebrations along with the first month of each season. This is why new year celebrations often take place in March (Spring Equinox), June (Summer Solstice), September (Autumn Equinox), and December (Winter Solstice).

The Sun & The Stars

The Hindu calendar influenced many South and Southeast Asian calendars. It is based on a “sidereal” year, which can be measured by the apparent movement of the sun through the fixed stars. The spring equinox marked the new year and coincided with the movement of the sun into the constellation Aries. Over time, the orientation of the Earth’s axis has shifted. This means the sun now enters Aries around 18th April. Some calendars fix the new year to one date (usually 14th April), while others continue to measure by the sun.

Some calendars measure multiple types of year, like ecclesiastical years (church) and civil years (city). The Hebrew ecclesiastical year begins on 1 Nisan (30-day month around March-April). This date determines when each month begins and when religious festivals and pilgrimages are held. The seventh month, Tishrei (30-day month around September-October), is also the first month of the civil year. This date marks the new agricultural year and advances the year number. The two-day celebration Rosh Hashanah (“head of the year”) begins on 1 Tishrei.

Weather patterns were highly significant for agricultural societies. The Kutch district in Western India is largely desert. They celebrate new year on the 22nd June because it marks the traditional start of monsoon season. In Ethiopia and Eritrea, Enkutatash celebrations fall on 11th September because it marks the traditional end of the rainy season. Ancient Egyptian calendars had three seasons based around the annual flooding of the Nile (Inundation, Emergence, and Low Water), which left behind essential fertile silt and moisture. Each year started with the arrival of the flood. This usually occurred in Thoth (11th September-10th October), which is the first month in the season of Inundation.

During the Middle Ages, many Christian countries chose 25th March or 25th December for the new year. Traditionally, these are the dates of the Nativity of Jesus (when Jesus was born) and the Incarnation Of Jesus / Annunciation (when the angel Gabriel visited Mary).

Our new year actually honours the Roman God, Janus. Early Roman calendars had ten months (March-December) followed by a “winter” period. This period later became Mensis Ianuarius ("month of Janus") and Mensis Februarius ("month of Februa") – or January and February. The new year was supposedly moved from 1st March to 1st January to honour Janus because he was the god of beginnings, transitions, time, passages, gates, doorways, and endings.

We make our name labels with a unique adhesive, which allows them to stay firmly put throughout the whole year.

You can use Stikins to label clothing and fabric items. Apply your name labels onto the wash-care label and not directly onto the fabric itself. We applied our name labels onto wash-care labels during testing. This means we can guarantee they will work when applied in this way. While they may work when applied directly onto some fabrics, we cannot test them all. This means we cannot offer the same guarantee if you apply your Stikins directly onto fabric items.

You can also label non-fabric items with our name labels. This includes shoes and bags, lunch boxes and water bottles, stationery and books, sports kit, and other personal items.

You can order Stikins name labels online or by phone. We offer same despatch up to 3pm (Monday to Friday). Orders placed after 3pm or over the weekend despatched on the next working day. Our standard delivery uses Royal Mail’s first class service; most first class post arrives next day, although items may take up to five working days to arrive. For more urgent orders, we offer a special delivery service. This uses Royal Mail’s special delivery guaranteed service, which costs £6.30 and guarantees your name labels will arrive by 4pm on the next working day.

Next blog post: Why Should I Use Stick On Name Labels - Our Guide To Name Label Products
Previous blog post: Make Your Name Labels Truly Personal With Our Simple Top Tips