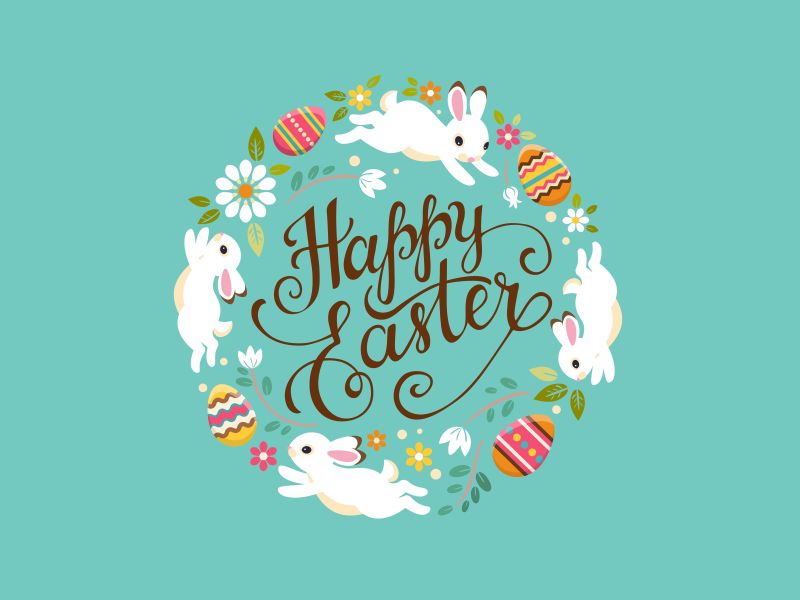 A very Happy Easter to all of our customers and their families from all of us here at Stikins name labels! We hope that you all enjoy this Eastertime – and have plenty of fun while staying safe and well.

We’ve had our own Easter hunt to find some fascinating facts about Easter. Many of the things that we associate with Easter come from very different origins – including different times and places across the world.

Where Does the Name Easter come From?

Our name for Easter comes from an old Germanic word, “austron”, which means dawn.

Some say Easter was named for a Germanic goddess (possibly known as Eostre or Ostara); it is thought that her festival day took place on the Spring Equinox and that a month (April) was named in her honour (Eosturmonath / Ostarmanoth). She was a goddess of fertility, spring, and sunrise – and, according to one folk tale, had a pet bird that she turned into a rabbit with the ability to lay colourful eggs.

Many countries have names for Easter that come from the Hebrew word “Pesach”, which refers to the Jewish holiday of Passover. These include France (Paques), Spain (Pascua), Italy (Pasqua), Albania (Pashke), Greece (Pascha), Norway (Paaske), Holland (Pasen), and Sweden (Pask).

Why Does The Date Of Easter Change?

Easter changes from year to year because it is determined by a lunar calendar – based on the phases and cycles of the moon. Easter is celebrated on the FIRST SUNDAY that follows the FIRST FULL MOON that follows the SPRING EQUINOX (which falls on or around 21st March). This means that Easter can be as early as 22nd March or as late as 25th April.

Why Do we Associate Eggs With Easter?

Eggs have been viewed as important symbols for many, many thousands of years. In very ancient cultures, they were associated with death and re-birth; ancient Sumerians and Egyptians would place decorated ostrich eggs or gold and silver representations of eggs into graves. Decorated ostrich eggs discovered in Africa have been found to be over 60,000 years old. Later, the egg was associated with fertility and new life; decorated eggs were exchanged as gifts during festivals to celebrate the arrival of spring – a time of new life as winter ended.

Early Christians were said to have stained eggs with red colouring to symbolise the blood shed by Jesus during the crucifixion; this tradition was officially adopted by the Christian Church in the 17th century as a symbol of the resurrection.

It is also thought that there may have been a more practical reason for associating eggs with Easter; eggs were one of the foods that could not be eaten during Lent. However, chickens wouldn’t stop laying eggs and there would be a plentiful supply when Lent came to an end – just before Easter.

For many years, traditional “Easter Eggs” would be ordinary duck or chicken eggs – painted or dyed for decoration – which were exchanged as gifts, turned into decorations, or used in games (including egg hunts, egg rolling, egg tapping, and egg dances). Alternatively, cardboard would be used to create hollow egg shapes that could be filled with Easter gifts.

It wasn’t until the 19th century that chocolate Easter Eggs made their first appearance. In Britain, the first Easter egg was made in 1873 by J.S. Fry & Sons; Cadbury’s followed suit just two years later.

Why Do We Associate Rabbits With Easter?

Rabbits share a lot of associations with eggs. They give birth to multiple litters of 4-6 young (or “kittens”) each year and have long been associated with fertility and spring.

Some ancient cultures believed that hares were hermaphrodites that could self-fertilise, which created a link to Christian ideas of virgin births and the Virgin Mary, while other ancient traditions associated rabbits with death and rebirth, which created a link to the resurrection. Many sacred sites across the world depict a common symbol known as the “three hares” in which three hares (or rabbits) chase each other in a circle; while the original meaning has been lost, the symbol is now associated with the Holy Trinity.

The main reason we associate rabbits with Easter is German folklore. According to German tradition, the Osterhase (Easter Hare) visits children’s homes to judge whether they have been good or bad. Children would make nests out of twigs and branches for the Osterhase but only those who had been good would awake to find gifts of brightly decorated eggs (or sweets and toys) in these nests.

German immigrants carried these traditions to America in the 1700s; however, there were far more rabbits than hares and so the tradition shifted from the Easter Hare to the Easter Bunny. Children would use hats, bonnets, or paper boxes to make the traditional nests – nowadays, Easter baskets are far more common.

Like chocolate Easter eggs, the 19th century also saw the introduction of chocolate bunnies. According to a number of recent surveys, the majority of people who are gifted with chocolate Easter bunnies will always eat the ears first!

We hope you all have a lovely time this Easter – and that you all stay safe and well. While these might not be ideal conditions to be celebrating Easter, there are still plenty of ways for families to safely have fun and celebrate (including indulging in an Easter egg or two or three or four or more). You could even visit our Kids Activities page and download one of our Easter Colouring Sheets!

We will be closing this afternoon at 5pm for our annual extended Easter Break. Any orders placed during this time will be printed and posted when we return; any enquiries will also be answered when we re-open.

Providing that our circumstances and government advice remain the same, we will be back in the office from 9am on Monday 20th April.
If anything changes, we will notify customers via our website and social media pages.

Happy Easter From All Of Us To All Of You!